langmick wrote:Tony Thunder Smith was a huge influence on me, I hear drums the same way he does. I used to play along to that live Beck/Hammer record a helluva lot. Cool grooves and a tight powerful sound, but with some sloppiness and bashing that wasn't too crazy, but almost out of control. Lots of odd times, but grooving.

I was there at that Day on the Green!

...actually, the day before, cause they had a better line up:

The next day it was:

The Jan Hammer Group was pretty impressive, but Jeff Beck was awe-inspiring.

Morgenthaler wrote:I think we've touched on this before, but I'd just like to run it over once more. Besides Vinnie, Weckl, Tain, Jojo, Buddy
all the really household names, which are your personal heroes? Of course there could be local cats that "no one" has heard of
and it could be international players (like Per Lindwall) who are just not drum royalty for some reason.

I'd like to mention two myself: Dion Derek, the son of Mother's Finest couple Baby Jean Kennedy and Doc Murdock,
who has drummed for them on several points in their career. Notably he recorded their 'Black Radio Wont Play This Record'
which made a huge impact on me in 1992 - where his funk rock drumming (in a mix between Will Calhoun and Deen Castronovo)
just floored me. The production is *very* 1992 but the drumming still is absolutely ace to me. I love his feel and his way of tying it all together.

The other is Steve Holley. He has played for Paul McCartney and many others, but his playing on 'Joe Cocker Live' is really all I need from
a pop/rock drummer. *Solid* is the word. Brilliantly comforting and driving the big live band with horns, backup singers and all and really
grooving his ass off. I love that album to this day.

Which are your somewhat lesser known heroes?

Would you mind please defining "heroe" some more? Drummers you attempted to emulate in some fashion or another? They marked a milestone in your journey as a drummer? Thanks...

beat hit wrote:
Would you mind please defining "heroe" some more? Drummers you attempted to emulate in some fashion or another? They marked a milestone in your journey as a drummer? Thanks...

Steve Holley plays here correct? Solid indeed.. Any other significant clips with him?

Exactly that! And people mentioning guys like Gadd and Marotta missed my initial point which was to name drummers
that wasn't drumming stars - but who helped shape your understanding of what you thought drumming should be/do.

Here are a few tracks from the album I mentioned:

The first names that pop into my head are Steve Gorman(Black Crowes) and Gene Lake(Screaming Headless Torsos and Me'Shell N'degeOcello). Steve because he has a cement truck feel to him. The Crowes move with him. Meat and potatoes but heavy. Gene Lake has been a big influenece since seeing him with MeShell at a HORDE fest in the mid '90s. Saw him again with MeShell a few years later and I remember turning to my girlfriend and saying " Vinnie is my fav drummer but I wanna play like this guy" I think that says enough.
Top

Rick Wright. My first drum teacher. Set me on the path of how to. Kurland Music in Worcester MA. Moved to Nashville decades ago. You never ever forget your first drum teacher. The influence they have is very powerful when your young and hacking away.
Top

Morgenthaler wrote:name drummers that wasn't drumming stars - but who helped shape your understanding of what you thought drumming should be/do.

What if they happen to be "stars"?
Top

I always loved Frank Bruno with Tina Turner, damn, Italians are everywhere in that business !!!

I come from Tain, Vinnie, Omar, Jeff, Fish, Stewart, and many more...
Top

Morgenthaler wrote:name drummers that wasn't drumming stars - but who helped shape your understanding of what you thought drumming should be/do.

What if they happen to be "stars"?

My first real drum hero was Bill Bruford; I ran across this cool pic of him the other day: 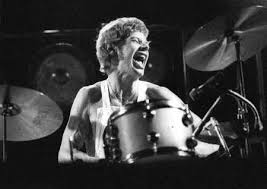 There was a guy named Mike Hyman who I saw play with Roy Rogers the slide guitarist.

They opened up for Robben Ford at the Blind Pig in Ann Arbor.

Hyman played like no one Id ever seen and totally inspired me. He had some bionic coordination going on with what i later found out was a second line feel. Killed me.

Brechtlein played with Robben and of course he wss sick but more conventionally chopsy and really loud.

I kept on thinking more about what Mike Hyman played.
Top

I've studied with Paul Brochu for over 4 years. He's been very inspirational to me. Weckl once said that the best show he's ever seen was Gino Vanelli with Paul on drums. Quite a compliment.

Users browsing this forum: No registered users and 5 guests